As we mentioned previously on the blog, we’re spotlighting the local Nevis shop owners who display their unique crafts at our weekly Beach BBQ on Thursday evenings. Last week, we met Millie and learned about gifts created with calabash gourd.
This week, we would like to introduce you to Marvin J. Chapman, owner of Chapman’s Stone Art. 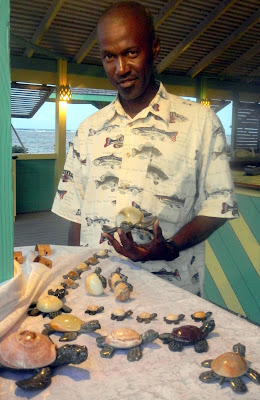 Marvin, who is from St. George’s in Gingerland, has been sculpting stones for more than 20 years. Marvin’s skills are self taught – although he says Physics was his best subject in secondary school.
He was inspired to begin carving after seeing a stone carving of a face at a friend’s home. With a simple masonry chipping hammer and a desire to carve, he began his career. His talent was evident early on and he earned a sponsorship from the Canadian Training Awards Project to study sculpting techniques in Jamaica.
Marvin hand picks lava rocks found on Nevis and sculpts them into timeless works of art using chisels, drills and saws. He is able to carve unique items such as fish, replicas of Carib and Arawak rock drawings, dolphins, busts and more. Each of his works is hand carved and unique, as each stone varies in appearance.
What he enjoys most about his career is meeting people from all over the world. His carvings have earned several awards and recommendations from regional sculptors.
Meet Marvin in person at the weekly Beach BBQ, where you can view some of his carvings. You may also spot his sculptures in our Treasure’s Boutique.