The Nevis Cycle and Triathlon Club is gearing up for the 7th Annual Olympic/Sprint Triathlon. The event, known as Carino Health Spa Triathlon, attracts athletes from all over the world. In 2008 there were 128 athletes from 25 countries who attended and the event is now the second largest tri event in the English speaking Caribbean. 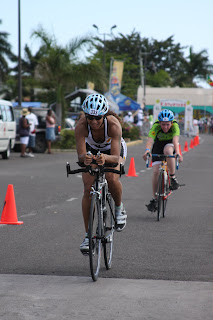 Regional athletes set to compete in the 2009 event will represent Trinidad, Barbados, St. Martin, Tortola, St. Thomas, St. Croix, Puerto Rico, as well as St. Kitts & Nevis. A huge milestone was passed with the race being sanctioned as an ITU Continental Cup event, offering ITU and PATCO qualification points to the competitors.

For the fourth time, the event is sanctioned by the Organization of East Caribbean States (OECS). In recognition of this special status, the Nevis Cycle and Triathlon Club will award the top male and female OECS nationals with a champion’s trophy. Current female champion Claire Morrell of Grenada and defending OECS male champion Reggie Douglas from Nevis will be ready and willing to take on any challenges to their titles. 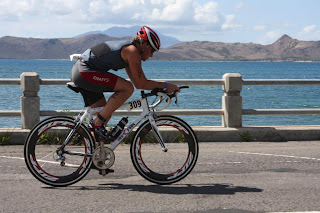 The swim will take place in the Gallows Bay in downtown Charlestown. There will be a beach start following a simple triangle format – two laps for the Olympic distance swimmers and one lap for the sprint. Upon completion of the swim competitors will run along the bay front for approximately 60 meters to the transition area where their bicycles will be stationed.

Upon leaving the transition area, the bikers will head north along the main island road, towards the airport and the turnaround point. The bicycle course is relatively flat with a maximum elevation of 150 ft. Bikers will loop the course twice for the Olympic distance and once for the Sprint, before heading back to the transition area to prepare for the run to the finish.

The run course will be two laps for Olympic and one for Sprint. The run is flat, heading north from town out to the Four Seasons Resort Nevis, where they will turn around and head back to the finish line on the waterfront in Charlestown. Here the winners will be crowned as champions of the 7th Annual Olympic Triathlon.